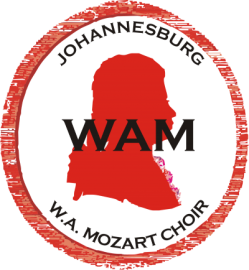 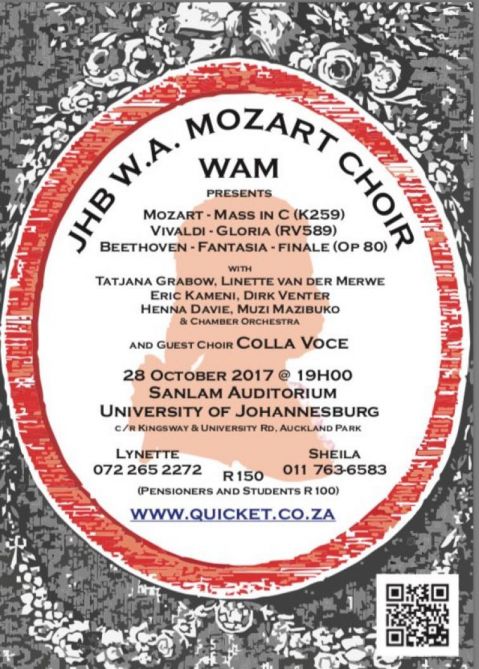 The Jhb W.A. Mozart Choir will be presenting a programme of sacred classical music on Saturday 28 October 2017. Accompanied by an outstanding chamber orchestra featuring some of the city’s top talent, the choir will present works by Vivaldi, Mozart, and Beethoven.

The opening work, “Gloria in D” by Vivaldi (RV 589), is often referred to as one of his most effervescent works, and was composed in Venice, probably in 1715. In this work, Vivaldi presents the traditional Latin text “Gloria in excelsis Deo” in twelve short movements.

The first half of the programme will be concluded by guest artists, COLLA VOCE (the South-Gauteng Youth Choir) who, under the baton of Henk Barnard will perform the “Lacrimosa” from Mozart’s Requiem, as well as works by Rheinberger, Lauridsen and Biebl.

After a short interval the concert will continue with the “Missa Brevis et Solemnis in C” by Mozart (K 259). One of Mozart’s lesser-known Masses, composed in Salzburg between 1776 and 1777, this compact little gem exemplifies the graceful Austrian Rococo traditions of church music. Interestingly it is scored without Violas.

For the final work of the evening, COLLA VOCE will join us on stage for a combined performance of the final movement of the “Choral Fantasia in C” by Beethoven (Op. 80).

The concert will be at the Sanlam Auditorium of the Univerity of Johannesburg at 19h00 on Saturday 28 October.